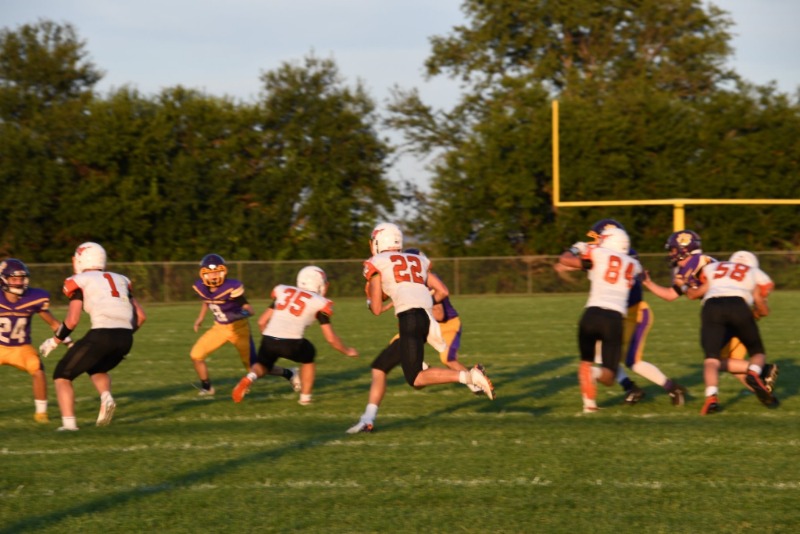 Last Friday night the Stanton Mustang Football team traveled to Tekamah to face the Tigers. The Mustangs had a tough task ahead as the 1-0 Tigers amassed 430 yards of offense in their week one win. The Mustangs stopped the Tigers on 3 drives in the first half, but they were able to punch one score in before half to take a 6-0 lead going into the break. On offense, Stanton had a turnover and some miscues that ended drives. “We went into half down 6, but felt really good about the game plan on each side of the ball. We just had to limit turnovers and finish drives”, said coach Stoddard.

To start the second half, the Mustangs offense had another three and out, but halted a Tigers drive once again.  Stanton quarterback Parker Krusemark on 38 yard reception to start the next drive and from there the Mustangs would start clicking scoring on their next three possessions. Gage Tighe scored on runs of 1 and 10 yards and Sutton Pohlman scored on a 3 yard scamper. Freshman Brayan Acuna was 2-2 on PAT’s. “In our run game we rely on wearing out the defense, we really started to open holes and our backs were getting downhill for positive yards” said Stoddard. “The offensive line and TE’s did a great job for four quarters, Jordan Gartner, Jackson Benson, Mason Bruggeman, Ben Wilke, Thomas Cunningham, Christian Flood, Matt Reese, Brennan Wragge, and Nathan Wragge all rotated at those positions and really worked well as a unit”, said Stoddard. Stanton will host 2-0 North Bend Central next week, kickoff is at 7pm. The program would like to thank all the community members who attended each game so far this season and hopes to see another big turnout in Stanton this Friday.