After our fundraising, we have torn down our #54 car from last year to reuse it for parts on the new car. We sketched a frame for the car with a huge piece of paper and blue tape. We measured out how long the new car will be and its going to be 11 feet by 3, 11” feet. After making our sketch, the seniors’ boys and girls started cutting out measurements and the rest of the team worked on bending the metal tubing. This took us 2 weeks to finish. The last thing the Stanton Power Drive team accomplished before the Christmas break was making the frame for our new car. The frame is better than the one from the batman car because it’s more durable due to our experienced welders and its more balance with the help of our teacher. Our goal for January is to weld the front axle and mount back wheel of the car.

Everyone, in the class, started to come up with colors for the #28 car and we sanded the old paint off the car and figure out what colors we are going to paint the #28 car. The sophomores rewired and put new batteries into the car. We built a new steering wheel out of metal tubing. The sophomores adjusted the breaks on the car.  Our goal for January is to find a color for our new car.

For January, the #82 car main thing to do was to weld the front axle of the car. This was the hardest thing the team had for the month. The senior boys and Mr. Seeman worked on trying to keep the axle straight so our welders can weld it on. While that was going on the others worked on the wheels, putting on the bearings and making sure they are tight and stable. The team was done putting on the axle during the 17th of January. The next thing we got done with the #82 car was to put the back wheel on the car. It was complicated most of the time because we needed to get the back wheel to be straight with the axle and doing measurements on the axle. This took us a week and three days. Our goal for the #82 car in February is to work on the breaking system for the car

For January, the #28 main thing to do find a color to paint the car with. The team finally came up with the colors and the colors are orange and black. Before the team started to paint, the car battery was taken out and all wires were disconnected. The car’s transmitter, starter, and engine were covered with blue tape so that nothing can get on them. We used spray paint to paint the car. The team all had to a mask to wear on their face so they don’t inhale toxins from the paint. Mr. Seeman turned on the fan to the smell gets out of the shop and so clean air comes in. Our goal for February is to put our number on the car along with the people and companies who all donated.

During the month of February, the seniors were currently working on the front disk brake on the front axle of the #82. These are the new brakes that the Stanton Power Drive team never used before so it is complicated on how to adjust them, but thanks to our teacher Mr. Seeman we know how to fix and adjust them. We are using a mig weld to hold the breaks. We used a fire blanket while welding the breaks just in case a fire starts to happen. This is one the toughest parts to do for the car because if it is not exactly perfect it won’t work. The main difficulty we are having right now is spacing. Our goal for March is to get the skin on and the brakes perfect and get some test runs on it. 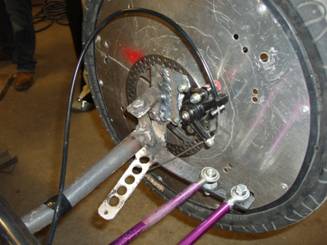 For the month of February, the #28 goal was to put our number and letter which is S28 and put the people names on the car who donated to us. We did not get that done because our teacher wanted us to make sure that the vehicle works and checking on brakes. Our goal for March is to get this all done and get some test runs and be ready for April.