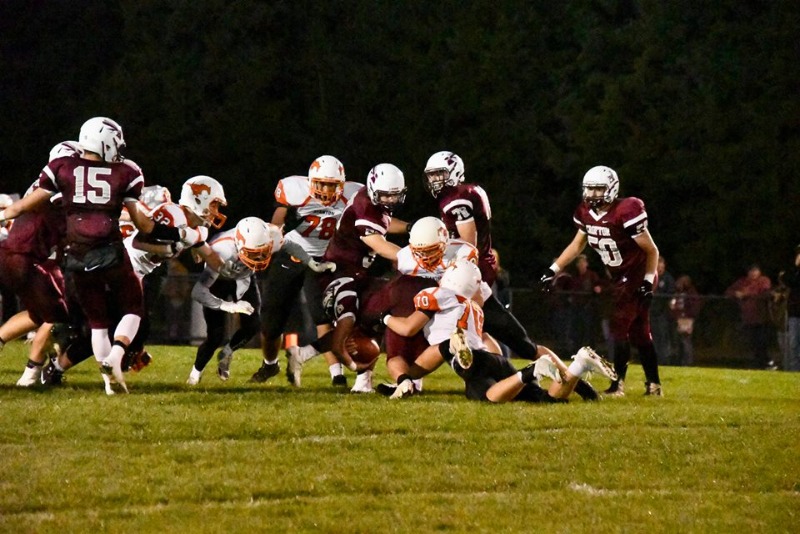 CROFTON EDGES PAST THE MUSTANGS

Last Friday night the Stanton Mustang Football fell short to the Crofton Warriors 20-19. Stanton jumped out to a 7-0 lead when Sutton Pohlman ran the ball out from 31 yards. Issiah Borgman tacked on the extra point for a 7-0 lead. That would be all of the scoring in the 1st qtr. Crofton would score in the 2nd qtr after a long punt return making the game 7-6. The Mustangs would add a touchdown right before half on a Pohlman 6 yard run to take a 13-7 lead into the half.  “We  felt good about our game plan on both sides of the ball going into the half. We discussed our assignements and adjustments and focused on finishing the game with a strong effort”, said head coach Dave Stoddard.

To start the second half, both teams were in a defensive battle. The Mustangs had a couple of promising drives that led resulted in turneovers. It wasn’t until with 7 minutes left in the game that Crofton hit a 80 yard TD pass to tie the game at 13 a piece. Stanton would turn the ball over again and Crofton used the short field to punch it in from 1 yard out to take a 20-13 lead. Stanton was not finished as Marcus Spotanski connected with Pohlman on a 57 yards touchdown pass. The game tying extra point was blocked and the Mustangs could not capitalize any further as the game ended in  20-19 loss.

"Once again we had great effort, we had several opportunities to add points, but could not finish drives when we needed to” said Stoddard. “We are working hard each week to fix the in game problems we are having, we will continue to strive each week to reach our full potential”.

The Mustangs were led in rushing by Sutton Pohlman 24-159 yds, Cade Goger 5-16, Matt Reese 1-2yds. Receiving leaders were Pohlman 3-91 yd and Moorghan Prusa 1-11yds. Spotanski led all passers with a 3-11 performance with 91 yards and 1 touchdowns.

The Mustangs will host Ponca this week at 6:30pm. As it is homecoming week hope to have a lot of alumni in attendance and another overall great crowd on hand.